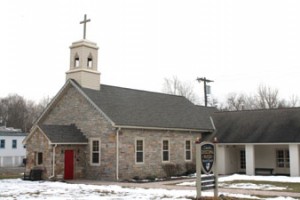 Harriet Chapel is located in the Catoctin Furnace, three miles south of Thurmont. The furnace, originally known as Johnson Furnace, began iron-making operations in 1776. As the furnace operations grew, so did the population around it, and in 1827 it was decided a church should be constructed. The construction was completed in 1828, and worship services were led by a Moravian minister from Graceham.

Today, Harriet Chapel continues to strive and serve its members and its community.