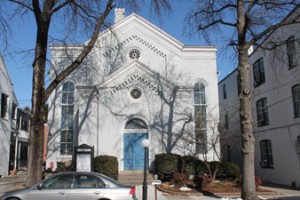 In 1780, the Rev. Stephen Bloomer Balch, D.D., pastor of Georgetown Church, rides by horseback monthly and fortnightly from Georgetown to Frederick and becomes founder of the English Presbyterian Church located on the southwest corner of Bentz St. and Almshouse Rd. (later Fourth St.). A Presybterian Church Cemetery is also founded on Fourth St. A new and the current church located on West Second St. is completed and dedicated in 1827.

During the Civil War battle of Antietam in September 1862, the Presybterian, like other Frederick churches, was taken over and used as a hospital. In 1864, during the shelling of Frederick, the church supposedly was struck by an artillery shell, which penetrated the roof. In 1884, arrangements were completed for the removal of bodies from the Fourth Street Church Cemetery to Mount Olivet Cemetery.

Over the years, the church undergoes major renovation in the sanctuary and a new educational addition was dedicated in December 1965. In 2005, Frederick Presbyterian Church celebrated its 225 years of service to congregants, friends and the community.