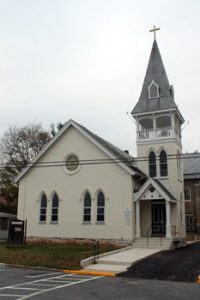 The original wooden church building and the “brick church” which followed were located in the burying ground a mile north of the village. Though the two groups worshipped in the same meeting house, they finally came to a parting of the ways. About this time the old Israel’s Creek building was destroyed. During the interval between the destruction of the opening of Shiloh Church, the Methodist Protestant congregation worshipped in the “woods”, located approximately where Walkersville Middle School now stands. The Methodist Episcopal congregation held services, when weather permitted, in a woods on the north side of the road leading from the Israel’s Creeks Church site west of Glade Cemetery.

On July 23, 1880, the site of the present church was deeded and in 1885, the church building was constructed on this land along Main Street in Walkersville. It is not known exactly when Shiloh Church was closed but some members of the Protestant congregation came into the Methodist Episcopal Church.